Now that we know how to read the encoders on our mouse, we can use that to estimate the position and orientation of our mouse at any given time. This is a form of odometry.

Why is odometry important? Suppose we want our mouse to move forward by one maze cell. We could turn on both motors for a fixed amount of time, and hope the mouse moves exactly the distance we want it to. In practice, this doesn’t work due to friction, changing battery voltage, and many other factors. The difference between the desired movement and the actual movement is called error, and knowing the error is the first step towards correcting it.

When we describe the position and velocity of a robot, we are actually describing the position and velocity of a single point somewhere on the robot. For a differential drive robot like our mouse, this point is usually taken to be halfway between the wheels. Since a point can’t have a rotational velocity, the “point” is actually a coordinate frame. You can think of a coordinate frame as a set of coordinate axes that are “attached” to the mouse and move/rotate with it. 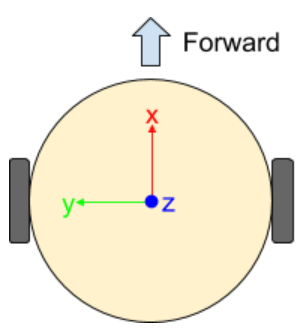 Consider the coordinate frame in the diagram above. When the mouse moves forward, it moves in the positive x direction. When the mouse rotates, it rotates around the z axis (which points upwards). The concept of coordinate frames is fundamental to robotics, but we won’t be able to cover it in much depth (try EECS C106A if you're interested in this type of stuff!). Fortunately, we only need to know some basics.

Translate the formulas into Arduino code to fill in the TODOs below.