Now to get to the real meat of designing PCBs: board layout.

The first step in taking you schematic to the physical realm is to match each component to a corresponding footprint. Footprints are a physical representation of an electrical component on an PCB, like a footprint that the component makes on the board. Many footprints can correspond to a single schematic symbol exactly because many different components can correspond to a single schematic symbol. Think about it, how many different kinds of resistors are there? They all share the same squiggle symbol, but are of all different kinds of shapes and sizes.

Note: An important characteristic of this symbol-to-physical conversion process is knowing what parts to use comes first. Your circuit's components must be specified before you can move on to layout. We won't cover how to choose which part to use here, but will come back to this topic later.

Footprint assignment is done in the schematic editor. You can see that the tool icon for it shows a link combining the KiCad icon for part symbols and that for part footprints.

The Assign Footprints window is notoriously bad at being clear on what things do. The basic process is to filter and search for the footprint you want by library, number of pins, by filters the symbol has specified, or by keywords.

Now that all the components have been given a physical representation, it is now safe to move on the other half of KiCad and start actually making a board. There are a couple of ways to move the schematic to layout, but any method you choose will involve:

Here is one way to do it straight from the schematic editor in one click:

If a PCB layout file for your project has not yet been created, you will be prompted by KiCad for confirmation of creating the file.

This is KiCad's layout editor:

Visually, it is very similar to the schematic editor, with the most notable changes being that the background of the main work pane is black, and the addition of a new side panel on the right. We will go over the important features in a moment, but first:

Updating from the schematic should bring up this "Update PCB from Schematic" popup. For first time updates, none of the additional options on the top will matter, but for future iterative updates from the schematic to the layout, these options will determine how KiCad may deal with potential conflicting changes and control additional cleanup of the layout. 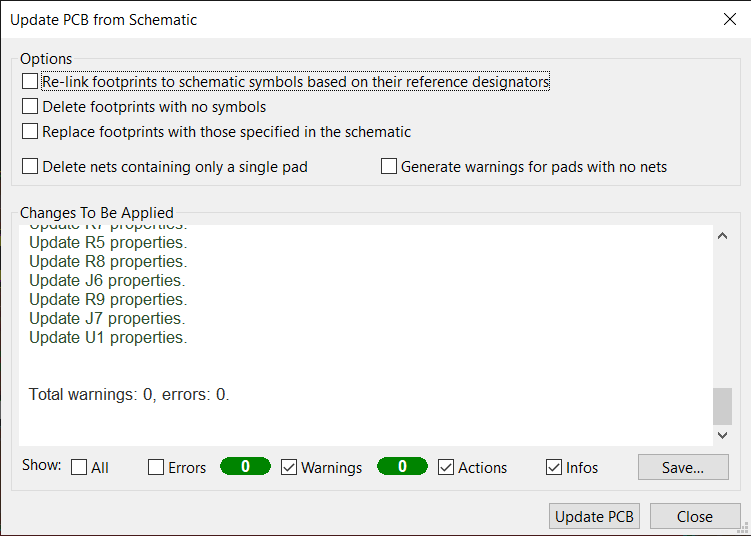 When there are new parts to be added to the layout from the schematic (such as in the first update from schematic), "Update PCB" will add in the new footprints to the layout, and put you immediately into block placement mode for the added footprints.

Although we discussed what layout is, we haven't really talked about how to do it yet. We'll go into it more later (as we want you to just try doing it for now), but the basics steps are:

Don't worry if this feels too hand-wavy right now. The light-sensor lab will hold your hand as it walks you through the steps.

As already mentioned, manipulation and working with selection blocks is exactly the same as in the schematic editor. An important detail of object selection in the layout editor though is: selection also follows the grid. This means a smaller grid size will allow for finer selection.

The following is a short list of some of the tools you will likely use the most during layout, found on the left hand toolbar. As always, you can find more info about these and the other tools in the KiCad manual.

The image below is of an example completed board layout for the first lab board. Note that the colors and visual will be bit a bit different in KiCad 5.99.

The thin red lines in the layout are called tracks or traces. They represent the physical connections defined by the connections made in the schematic and are just thin segments of copper.

Similarly, the thick red polygonal shapes are called fills, and represent large spans of copper that are another way to represent wires in the schematic (usually power related wires). The green in the back is also a fill, but on the back copper (B.Cu) layer.

The turquoise lines denote the silkscreen, which will be explained a bit more in depth in a later article. Basically, they are the white text you see on PCBs and are useful for assembly and verification purposes, among other things.

There are many other tools and features in KiCad's layout editor that you can use, some of which will be covered in later as we advance to more challenging layouts. For now, just focus on the basics of placement and drawing tracks, but if you're curious, feel free to poke around and maybe find some bugs!